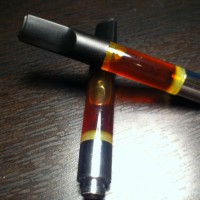 Vaporizing marijuana is the recommended method of use over smoking.

The vapourizer runs heated air across the plant without igniting it, releasing the cannabinoids in a vapour free from the byproducts of combustion. Some types rely on the user’s own inhalation to draw the hot air past the plant material, potentially exposing the lungs to more heat. Other devices blow air into an isolated bag, separating the heating element from the user and avoiding heat exposure. Laboratory work shows that cannabis vapour is composed almost exclusively of cannabinoids with virtually no pyrolitic compounds. The vapourizer raises cannabinoid levels in humans but does not raise exhaled CO levels. One pre-post design clinical trial showed that users with respiratory irritation improved symptoms and lung function after switching to a vapourizer. In short, vapourizers show promise for cannabis users who want to avoid pulmonary problems and prefer a more rapid onset than edibles provide.

One study also found that long term smoking of marijuana was not associated with adverse effects on lung function.

“In a large cross-section of U.S. adults, cumulative lifetime marijuana use, up to 20 joint-years, is not associated with adverse changes in spirometric measures of lung health”. (http://www.ncbi.nlm.nih.gov/pubmed/25521349)

So why do I still recommend vaporizing over smoking?

Vaporizing has been shown to decrease episodes of acute bronchitis and respiratory irritation. (http://www.ncbi.nlm.nih.gov/pmc/articles/PMC4456813/)

The bottom line is that despite the fact that “20 joint years” has no effect on lung function, there are still benefits from switching from smoking to vaping.